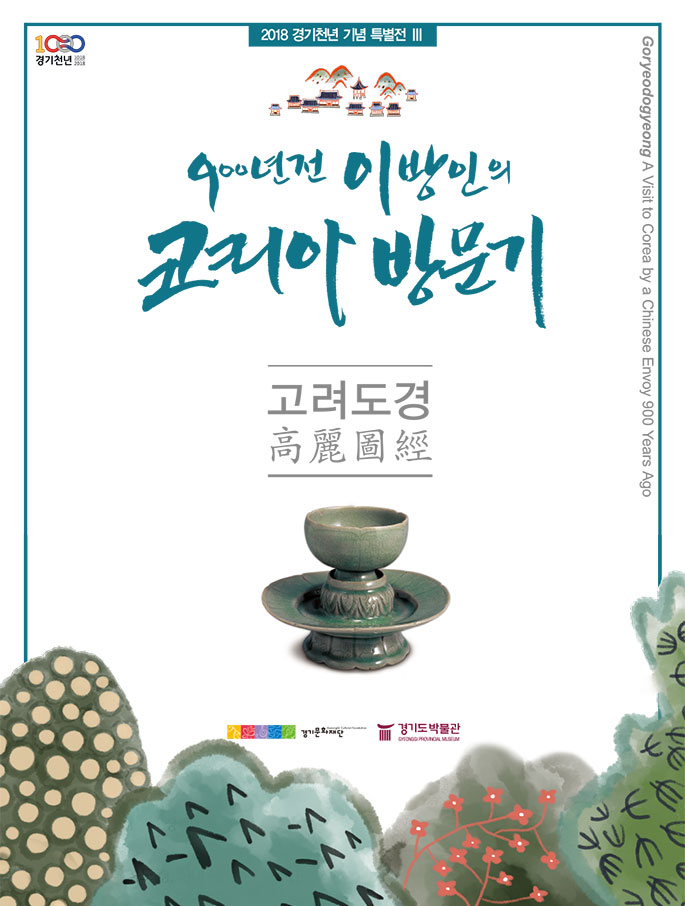 In commemorating the 1000 years of Gyeonggi and 1100 years of the founding of Goryeo, the exhibition holds its theme of exchange between Goryeo and the Song Dynasty. The 12th century, Xu Jing visited Goryeo, was a period of ‘crisis and prosperity’ as well as a political turning point for Goryeo. Eastern Asia at the time was made up of the Song Dynasty and Goryeo, the Khitan people and Jurchen people in the north. They had complicated and intense relationships with one another; either became allies or became enemies depending on the ongoing circumstances.

Goryeo had a flexible and utilitarian diplomatic policy and accepted advanced civilization through active overseas trade. Goryeo handpicked skilled artisans to make advancements as an original culture. Internally, as various systems were improved and economic power took a rise, the aristocratic culture of Goryeo reached its peak. The production techniques of ‘Tripitaka Koreana’, ‘Buddhist illustration, ‘jade celadon’ and ‘metal handicrafts’ that were ceaselessly produced from the earlier Goryeo period approached their period of maturity, and at the center of this was the ‘Gyeonggi’ province in the vicinity of Gaegyeong.
What is Goryeo Dogyeong?
Goryeo dogyeong is the first historical record of Goryeo society written by envoy Xu Jing of China in 1123, and it is the shortened title for Illustrated Record of the Chinese Embassy to the Goryeo Court in the Xuanhe Era. The earlier copy of this book consists of 40 volumes which are divided into 29 themes and 201 items. Volumes 1-2 explains the history of Goryeo before and after its founding, volumes 3-6 speaks of the facilities and palace of Gaegyeong, volume 7 and volume 16 tell of the official uniforms and officials, and volume 8 deals with major figures. Subsequently, volumes 9-15 tell of ceremonies and implements used in national ceremonies, volumes 17-18 speaks of religion, volumes 19-23 tells of the customs of various social classes in Goryeo society, volumes 24-26 explains the official festivities of the delegation, volumes 27-32 explain lodgings and daily items for living of the delegation, volumes 33-39 describes the sea route that the delegation traveled on and the ships of Goryeo, and lastly, volume 40 explains the identical civilization of Goryeo and China. The volumes also include a foreword written by Xu Jing, an afterword by nephew Xu Chan and travel records of the deceased by Zhang Xiaobo. A section produced in 1124 was presented to the emperor while Xu Jing kept another section for himself. However, the original disappeared with the destruction of the Northern Song Dynasty as a result of the 1127 Jingkang Incident, and Xu Jing’s nephew Xu Chan discovered Goryeo dogyeong with just its written form and no illustrations ten years later. In 1167 (Emperor Xiaozong of Song, 3rd foundation), Xu Chan reprinted the work and stored it in Chengjiang County (Jiangyin, Jiangsu Province), and this reprint is known as the first edition or Chengjiang edition, Gondo edition. Yet, the first edition was not passed down for a significant period of time but rather its copy grew popular; the Siku Quanshu copy and the complete edition of the Zhibuzuzhai congshu copy were also popular but had flaws where facts were omitted or were incorrect. Fortunately, the first edition without illustrations were rediscovered while organizing the palace library by the National Palace Museum of the Republic of China in 1925, and the facsimile edition of the first edition published in 1970 reached the public.
Introducing Exhibition Theme
Part 1 ‘Xu Jing’s Goryeo Dogyeong
Part 1 describes Song dynasty delegation’s visiting schedule and the compilation process of Goryeo dogyeong through images and panels. Visitors will take a look into the Xu Jing’s party who visited Goryeo with the intent to form friendly relations during the chaotic international situation of Eastern Asia as well as the diplomatic relations between Goryeo, Song Dynasty, Khitan people and Jurchen people.


Part 2 ‘Capital Gaegyong’
Part 2 introduces official events that Xu Jing partook during his one-month stay in Gaegyong, and described what he witnessed and heard. Due to Goryeo’s strict surveillance, the delegation had activity restrictions, thus Xu Jing mainly focused on happenings within his accommodation (Suncheongwan).


Part 3 ‘Customs of the Goryeo People’
As the most significant portion, Part 3 addresses the lives of aristocrats and common people of Goryeo. Xu Jing saw Goryeo as a society with well-established materialized culture and spirit that was unlike other foreign nations, but his Sino-centric view that states that the development is indebt to China’s enlightenment is this book’s flaw. The exhibition introduces the openness and dynamics of Goryeo culture that results from the fusion of Chinese culture with aboriginal culture. It also exhibits the well-known Goryeo celadon in addition to tea, liquor, country medicine, food and bowls, Buddhist illustrations, funerals, weights and measures and other relics. Also, the exhibition recreated garments Goryeo women wore; yellow dresses with white tops made out of hemp, so children can try the clothes on.


Part 4 ‘Jade Celadon and the Exquisite and Precious’
Part 4 displays the essence of Goryeo culture, one that even the Chinese were envious of. World’s top jade celadon of Goryeo, the exquisite and precious metal handicrafts, the Buddhist illustration and the early copy of the Tripitaka, which represented Buddhism of Goryeo will be exhibited. The ‘Avatamsaka Sutra Volume 1’ (National Treasure No. 256) and Painting of Avalokitesvara Bodhisattva (Treasure No. 1426) and other representative relics are enough to experience the peak of Goryeo culture. However, the Painting of Avalokitesvara Bodhisattva will only be open to the public for two weeks following the opening to prevent any further damage to the relic.