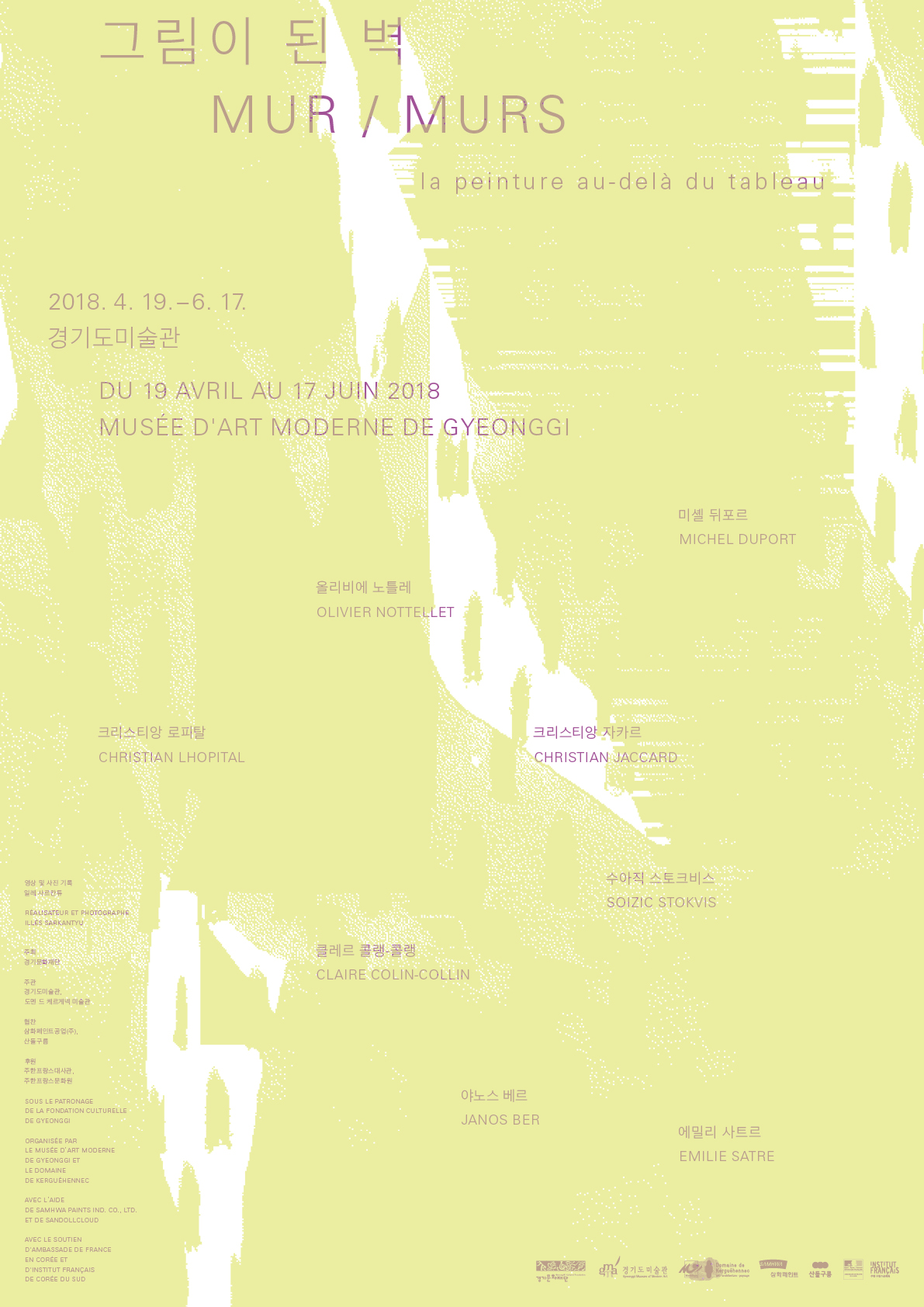 From the late 1960s to the early 1970s in France, an artistic movement called Support-Surface saw the day. It allowed the study of the painting through its deconstruction. The participating artists in Mur/Murs, la peinture au-delà du tableau continue to inquire what the painting is, with their creative and fundamental study of the painting, inside and outside of the canvas. Their experiments of the painting go beyond the frame onto the walls and into space. They either produce the world of abstract and supernatural images with their painting and drawing or engrave the images by making cracks on the wall or with soot.

In the exhibition hall, where the walls become the painting and the paintings are the walls, visitors can approach the works and have new visual and perceptual experiences that go beyond their range of vision by walking through the murals. In Mur/Murs, la peinture au-delà du tableau the form, color, and traces of artistic movement are maximized in the murals and give the visitors an opportunity to intensively think about what an image is in today’s world flooded with virtual reality, symbols, and images.
Main works and Artists
Emilie Satre, Loose, 2018, paint on wall

Emilie Satre paints the mural through promenade, her own practice of painting. The forms made of colors and fields continue linearly following the artist’s movement. Her mural is her trace. Connected and overlapped, the forms do not describe any external objects, but are constructed in a spontaneous and coincidental way, appearing on the wall in an abstract pattern. The elements of the drawing may seem like shapes that are mechanically repeated, and yet they are not specifically measured, but manually drawn one by one. They are the trace of handicraft work in an organic flow, piling up the temporal development of the working process. What makes the shapes a masterpiece is the drawing itself without being fettered by any rule or doctrine, the journey and the moments. Far from the painting that shows a closed conclusion, her drawing moves freely like wind, infusing life in the color, line, and bulk.
Janos Ber, No Title, 2012-2018, acrylic on canvas

Janos Ber does not paint on a canvas placed on an easel, but instead, he lays the canvas cloth on the ground and draws lines with a huge brush. The artist leans his body close to the canvas in order to paint rhythmic lines with intervals. He excludes any specific explanation, artificial composition, or literary modification, and makes traces with unconscious and coincidental movements. The making process, with its repetitive bodily motions, resembles that of asceticism. There is no hierarchical logic in his work. White, the background color between the lines, is not simply a background. It is an important element that enables the colored lines to exist and one that transforms into another form of line, connected to the colored lines. Not only the lines come into view against the white background, but the white background itself appears as another shape between the lines, making the lines also become the its own background. This relationship between the colors may remind viewers of Orientalism.
Olivier Nottellet, Hard Wall, Sweet Home (Painting Writes Me), 2018, paint on wall

The space made of Olivier Nottellet’s mural makes the viewers direct their attention to the bright yellow wall and black drawing. With the abstract colored fields and forms, the silhouettes simultaneously speak to the viewers in different ways. Black silhouettes appear like heroes on theatre stages against the wall that looks like a frame between the huge yellow and white sides. The strange black silhouettes entering the abstract screen seem somewhat familiar but not easy to define. For visitors, viewing those black silhouettes will be the chance to contemplate, making stories based on their imagination or pulling out memories of some forms they have seen. As so, the artist provides the visitors with hints, giving them a more playful way of contemplating art. While not reproducing the landscape in a tricky way, but arousing the active imagination of the viewers here and there on the wall, the artist works like a film director who edits the scenes, utilizing the wall and space as a huge frame.
Christian Lhopital, A Kind of Mind – Viewed by Soul, 2018, graphite powder on wall

Filling the whole wall with graphite drawing, the paintings of Christian Lhopital embody images such as clouds in the shape of weird plants, ghosts, or extraterrestrial beings. This hits one with the feeling of déjà-vu from one’s dream, or the sense of a supernatural and mysterious experience. The comical and humorous images intertwined and connected with grotesque images, like those of the devils in medieval cathedrals, form a world that seems to be in motion. The artist is good at freely and spontaneously drawing the uncanny figures that are likely to be in the imagination of youths or in myths. Resembling animated films that inspire movement by connecting stationary pictures, the artist arouses the phantom of an unreal world by her continuously ongoing, transforming, and rhythmical painting.
Michel Duport, Forms Without Quitting the Piece of Painting : Wall Arrangement, 2018, colored and paper on wall

The abstractly colored fields and the reliefs deliver a sense of volume, showing the characteristics of both the two-dimensional painting and the three-dimensional sculpture. Michel Duport has focused on the arrangement methods of canvas frames on colored walls in the 19th century, applying the composition and the tone of the background wall to the abstract art. The clear contrast between the achromatic colored wall and the primary colored reliefs reveals the intersection point of the painting and the sculpture. The reliefs have a form similar to those that can be seen in cubist paintings, where the structure of objects are analytically expressed – paintings of a combination of disconnected shapes. The artist avoids making his work voluminous by describing the painting so, but put in reliefs as real lumps that meet the flat painting. In front of his protruding work, visitors can take an active viewpoint by moving from the colored surface to the sides of the reliefs, not looking through a perspective that goes into the canvas. For the artist’s painting, the wall takes an important role as a real chunk and surface in space.
Claire Colin-Collin, No Title, 2018, paint on wall

Claire Colin-Collin paints a first layer, removes the paint and paints over it again, making her 2D piece of painting into a picture with weight. In this exhibition, the artist makes cracks in the wall using cracks of old oil painting as a motif. The clefts on the wall made by the chisel are filled with colors. Repeatedly scraped and plugged, the wall turns into a mural accumulating the traces of time, similar to wrinkled skin. While, the lines in the painting suggest the time that it took for the painting to be complete, they are not tools that represent or describe the external object, but a part of the mural that proves the life of the painting. Engraving shapes through the creative action of forging wounds into the wall is not possible on the canvas, and it reminds the basic human desire for painting as seen with the primitive murals in caves.
Soizic Stokvis, Linear, 2018, paint on wall

Born in the Netherlands and having spent her childhood there, Soizic Stokvis was influenced by Piet Mondrian, the Dutch abstract painter, and De Stijl, a Dutch artistic movement of geometric abstraction. Having been interested in the city landscape, system and structure, she displays objects in a simplified structure, one that would have been seen from an aerial view of any city. Viewers will see the colorfield area surrounded by straight lines on the white wall. Completing a mural sized geometric abstract painting, the artist shares her experience of facing a huge colored fields. Her work allows the viewers to examine the color and the form, the basic elements of the painting, without decoration. Just as the basic materials for architecture make the framework of a building, the lines and surfaces, the basic elements for making a shape, make the cuboids. The shapes that seem like a combination of lines and rectangular modules are placed in an order, but without a sense of volume or weight, free of the law of gravity. The artist finds out the attributes of signs in abstract art, as when in language consonants and vowels irregularly meet but allow communication.
Christian Jaccard, Wall Burning, Soot Shadows Partition, 2018, combustive gel on wall

Christian Jaccard makes abstract patterns by using fire to cover the wall with soot. When the movement of fire meets the wall, it produces an abstract painting with cadence and rhythm. This suggests the primitive mural paintings in caves. No conventional painting materials can be found on this wall filled with soot and burnt traces. No paint, no brush were used during the working process, but only the recurrent blazing and extinction of fire. The fire, the combustible gel, and the wall as the painting’s support – The only three tools used become the result of the work themselves. The combustion process evokes the flickering nature of life in a metaphorical and implicit way, just like poetry. Being suggestive of both the providence of nature and the energy that was released during combustion, the fossilized traces of the burnt gel and the wall full of soot create a ritualistic and sublime space.
Comments [0]
Leave a comment
You must be logged in to post a comment.